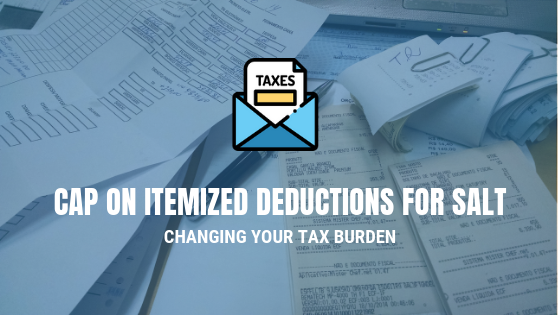 Tax season has always been stressful. But the recent changes introduced with the Tax Cuts and Jobs Act (TCJA) may have you wondering what you are in for. You may have already seen in the news that some taxpayers, especially those living in high tax states, have already seen their taxes go up. Others are seeing their much-looked-forward to tax rebates disappear. This has to do with the dynamics created by the increased standard deduction and the cap on State and Local Taxes (SALT) for those who used to itemize their deductions instead.

Let us dig deeper into this.

Changes to the standard deduction

The standard deduction is a predetermined amount that every person is entitled to deduct from their income when calculating taxable income. And your standard deduction amount depends on your filing status as well as your disability status.

TCJA increased–and almost doubled–the standard deduction for all categories. Good news, right? Not for everyone, because TCJA also put a cap on itemized deductions at the same time. This has put a greater tax burden on those who live in high tax states and in certain other circumstances.

A Cap on Itemized Deductions

Itemized deduction means listing each of your deductible expenses separately.

Here’s what people have been claiming as itemized deductions:

For those who do have higher levels of deductions, it made sense to itemize their expenses and reduce their tax burden. But now, with the TCJA putting caps on popular itemized deductions such as the State and Local Taxes, many taxpayers are unable to deduct all of the expenses they could previously deduct.

Beginning with 2018, the TCJA has capped the maximum SALT deduction at $10,000. This is definitely bad news if you live in a high-tax state. Let us see the implications of this capping.

Here are the top 10 high tax states for 2018. The table breaks down the tax burdens by property, income and sales taxes.

Your Income Bracket and the SALT Cap Impact

If you live in a high tax state, you’d be wondering how that is going to affect you. This depends on your income bracket. As your adjusted gross income (AGI) increases, so does the value of the SALT deduction when counted as a percentage of your AGI.

The middle column in the table shows how the value of the SALT deduction for a taxpayer goes up with their average gross income. No wonder then that, as their income rises, more and more taxpayers use SALT in their itemized deductions.

Take note also that a great majority of taxpayers with AGIs over $100,000 are utilizing SALT to offset their federal tax burden.

Most articles you are likely to see talk about the benefit of SALT going overwhelmingly to those earning over $100,000. While that may be true in statistical terms, take note of the AGI per filer in all these states in the table below. Taken overall, the AGI per filer works out to way less than $100,000 in all of the high-tax states.

A large number of people, way more than quoted data shows on the surface, are making use of the SALT deduction and may have some skin in the game when it comes to the SALT cap.

When it comes to the SALT cap you are in luck if you belong to a higher income bracket.

The provisions of the TCJA had a number of offsetting benefits that cushioned the high-income taxpayers from the blow resulting from capping of SALT at $10,000. These include the lower statutory tax rates, a much larger Alternative Minimum Tax Exemption than before and a reduction in the corporate income tax.

Tax Foundation says that “on net, these taxpayers tended to have a lower liability under current law, even with the capped SALT deduction.”

The real squeeze will come to those who are earning below $100,000—that is a vast majority of American taxpayers. If you fall in this group and live in a high tax state, you are likely to be affected by the SALT deduction cap.

What happens if you have way more in deductible expenses than what can be offset even with the increased standard deduction? If this is the case, you are likely to see you taxes for 2018 increase when you file this year (in 2019).

For a lot of taxpayers earning less than $100,000, the new tax law—which increases standard deductions, eliminates some personal deductions and caps the SALT deduction—also gives an interesting choice. Should you itemize or not when filing for taxes this year?

Read our articles on xxxxxxxxxxxxxxx and YYYYYYYYYYYYYY to learn more about filing taxes this year. Tax is always complicated. Some guidance from tax professionals like ………………. can help you pay just the taxes you need to pay, without paying in excess.

Please see the letter below from the NY State Society

Corporate CFOs have had their hands full this year, accounting

As we near year end, it’s time to take a

To learn more about Sound Accounting contact us at 631.675.0967 to speak with a representative.